The following first article written about A. C. Bhaktivedanta Swami Prabhupada’s arrival and mission in the West was obtained through work with the Butler Eagle News Paper in Butler, Pa., Prabhupada's first residence after arriving from India in 1965. Prabhupada's great desire to preach the mission of Love of God to all in the English speaking countries, started here. 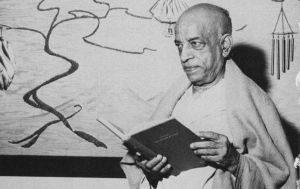 Srila Prabhupada
with the original Srimad-Bhagavatam

A slight brown man in faded orange drapes wearing white bathing shoes stepped out of a compact car yesterday and into the Butler YMCA to attend a meeting. He is A. C. Bhaktivedanta Swamiji, a messenger from India to the peoples of the West.

A Hindu by faith, the "learned teacher" has translated biblical literature such as Srimad Bhagavatam into English from ancient Sanskrit. He is now fulfilling a commission from his spiritual master to enlighten English-speaking people regarding their relationship with God.

"My mission is to revive a people's God-consciousness." says the Swamiji. "God is the Father of all living beings, in thousands of different forms." he explains. "Human life is a stage of perfection in evolution: if we miss the message, back we go through the process again." he believes.

The Swamiji has given himself a month to tell his message to all who will listen. He anticipates many informal meetings, such as a gathering of friends in the Gopal Agarwal home in Stirling Apartments Monday the night of his arrival, for an exchange of ideas regarding his philosophy of life. A simplified version of his theory is that life progresses from aquatic to plant, to reptile to bird, to beast to "beastly" human being and finally, to civilized man. "After this life there is a still better life on other planets," predicts the visitor. He believes that the highest possible state will be to go to God, or eternal life.

The traveller who left India for the first time Aug. 30 will welcome guest appearances or impromptu discussions with anyone who calls the Agarwal family. He says that he is here to talk. Now 70 years old, the appointed "missionary" to the United States was educated in India where he received a Bachelor of Arts degree. He became a disciple in 1933 and received instructions until the death of his leader in 1936. He has severed all family ties, forsaking wife and children and a business in Calcutta to follow his beliefs.

His religion remains Hindu. He does not ask his listeners to change their religious affiliation, but merely to become "better Jews or Christians," etc.

Bhaktivedanta lives as a monk, and permits no woman to touch his food. On a six-week ocean voyage and at the Agarwal apartment in Butler he prepares his meals in a brass pan with separate levels for steaming rice, vegetables and making "bread" at the same time. He is a strict vegetarian, and is permitted to drink only milk, the "miracle food for babies and old men," he noted. Even onions, garlic, and eggs are forbidden in his cult.

The Swamiji is equally philosophical about physical discomforts or wars: "It’s man's nature to fight" he shrugs. "We have to adjust to these things; currents come and go in life just as in an ocean."

"Life and Milk of Cow" is all-important to the Swamiji's way of life; all else is artificial, he claims. The government of India does not support the Hindu or Moslem religions, neither does it interfere with their practices, he says. His scholarly work is aided by benefactors when and where he finds them.

His special dress minimizes the importance of raiment; the white mark on his face is a symbol of devotion. The Swamiji renews his faith with daily prayer, chanting and meditation. If Americans would give more attention to their spiritual life, they would be much happier, he says.