MOUNDSVILLE, W. Va., Sept. 4—On the crown of a lovely green hill in the West Virginia countryside, under the aluminum roof of an open pavilion, the faithful gathered this week to chant the name of Lord Krishna and kneel at the feet of their spiritual master, a wrinkled brown man named A. C. Bhaktivedanta Swami Prabhupada. Hare Krishna Hare Krishna Krishna Krishna Hare Hare; Hare Rama Hare Rama Rama Rama Hare Hare.

It was the opening of a seven‐day festival at a communal farm celebratihg the birth of Lord Krishna nearly 5,000 years ago, and the chanters were members of the Hare Krishna sect, a small ascetic band of young mendicants in flowing robes who are appearing in increasing numbers on the streets of large American cities from Times Square in New York to Ghiradelli Square in San Francisco.

The meeting was the first such national gathering and drew several hundred members. In addition, it also attracted individuals who apparently came here in expectation of a religious awakening.

Prabhupada (Pra‐V00‐pa da), as he is called by his followers, came to the United States from India in 1965 to spread the word of Krishna, the.peripatetic goti of the ancient Vedic scriptures that constitute the basis of most of the Hindu religious cults.

In the ensuing years he has shaped a hard‐core group of about 1,000 United States devotees—the worldwide number is placed at more than 3,000—who have renounced the material world in the hope of finding spiritual redemption at death. Consequently, the members exhibit the enthusiasm of Jesus Freaks, the abstinence of monks and the persistence of a sidewalk Salvation Army drumbeater.

The Hare Krishnas stalk the city streets in groups ranging from six to a dozen, thumping drums and ringing bells, chanting in the belief that the souls of the nonbelievers they pass will be elevated simply by hearing the divine name of Krishna.

The men, their heads shaved except for a top knot of hair, wear dhotis (long loincloths) of burnt orange and pale yellow. The women are dressed in saris. All wear the mark, of Krishna—a daub of white clay or some other material that streaks down their forehead to a point between the eyes.

And all display the beatific look of rapture as the chanting rises in volume and intensity, accompanied by dancing and rhythmic hand clapping. Members of the sect dwell in city temples to which they have been assigned by Prabhupada, who himself resides in a former Methodist church in Los Angeles from where he directs the operations of the International Society of Krishna Consciousness. They sojourned here in buses, and vans with bright Hare Krishnas emblazoned on the sides; some hitchhiked and some came by commercial transport for thousands of miles to praise Krishna at his festival of birth and to listen raptly to Prabhupada preach the wisdom of 5,000 years of succession through disciples.

“Men doubt what they cannot see,” he intoned as the faithful pressed around the daily discourses the spiritual mentor conducted on the grassy hilltop, “and yet no man has seen the inside of an eyelid, which is closest to the eyes.”

Most of the devotees are in their late teens or 20's, and share a background in the upper middle class and the drug culture. Many are former Jews and while there are those who have been lured from a temporal life of intellectual achievement and status, the majority appear to be young people who had grown disillusioned after extensive experimentation with drugs and the hippie cult.

“Hippies are our best customers,” remarked 24‐year‐old Dharmaraj Das, while awaiting the arrival of Prabhupada at the cult's 350‐acre farm in the hilly wedge of West Virginia that separates Pennsylvania and Ohio, They are frustrated because they have learned that a life of illicit sex and drugs is not the way to spiritual consciousness.”

Purity of mind and body is the path to spiritual awakening, according to the cult's saintly Prabhupada, and devotees accept rigid rules of conduct that reject not only the materialism of their citysuburban background, but also the sense gratification and free expression of the youth culture. The Four ‐Regulative Principles, for example, condemn “illicit sex.” All sexual contact, including kissing, is considered illicit unless it is performed by married couples once a month at the optimum time for procreation. Intercourse is to be attempted only after each partner performs several hours of repetitive chanting to cleanse the mind.

The consumption of meat, fish and eggs is forbidden.

No intoxicants of any kind are allowed, and that includes coffee and tea. The final restriction is against gambling, which is extended to outlaw all “mental speculation,” a dictum that denies the devotee the privilege of opinions, whether they be his own or those advanced by other philosophers or spiritual leaders. “The rigidity of behavior and thought control has a purpose,” observed Prajapati Das, a former social worker from Dallas. “The regulations control activity,” he explained. “The control of activity, reduces tensions, freeing the senses. The heightening of the senses enlarges the mind, and leads to a greater consciousness.”

The control and discipline of the initiates is absolute, and outsiders struck by the hierarchical structure of the cult and its elitism, its attitude toward women and children, and its rejection of ideas find it difficult to fathom why it should attract men and women of inquiring minds. Response by Leader

The response by Prabhupada is that man in his imperfect state cannot recognize God, and only after he has freed himself of sin and has become submissive can he develop the spiritual attitude to follow Krishna.

The initiates are expected. to turn all their worldly goods over to Prabhupada and submit to the labors he and his assistants request of them. Except for the communal farm, where about 35 members live and work; most of the devotees dwell intheurban temples, chanting on the streets for donations.

The four divisions of the Hindu caste system are accepted as the law of God, and there is a yearning to reach the level of Brahmana —the intellectual—in this life or the next life as the soul transmigrates, hopefully toward eternal reunion with Krishna in a spiritual corner of the universe called Viakunta.

Inside the movement there are three areas of endeavor. The Brahmacharis, or bachelors, are the foot soldiers; the Grihasta are householders whose marriages have been arranged by the godbrothers with the approval of Prabhu pada on the basis of spiritual compatibility, and the Sannyasis, the highest order, are men who have renounced all family ties to wander from temple to temple to spread the word of Krishna.

“This is a movement of intelligent men,” explained Ruganuba Das Goswami, a 32‐year‐old Sannyasi who was a New York City social worker named Robert Corens until he was enlisted by Prabhupada six years ago. “We have plenty of educated men who have been searching for God for years and discovered Him in Krishna. They have to be intelligent to reach a point where they ask ‘Why?’ They see order in the universe and realize wherever there is order there is meaning.” And intelligent men recognize, he continued; that the material world's only rewards are disease, suffering, aging and death. “We are not these bodies—that is the first basic lesson of Krishna consciousness,” he said. “We understand that we have an eternal relationship with God and once that is developed then peace and prosperity will follow.”

Prabhupada, in an interview, mixed maxims and analogies to press the same point.

“What happens in this world is of no consideration,” he said as he sat cross‐legged on an oilcloth floor in one of the commune's dwellings. “This life is an opportunity to make your next life—behave like a human being and you can go back home to. Krishna. Act like an animal and you will become an animal in the next life.”

Diamond Is a Diamond

He said that the low number of devotees he has gained in this country after six years of effort did not distress him. “If you sell diamonds you cannot expect to have many customers. But a diamond is a diamond even if there are no customers.”

The presence of several hundred devotees at the commune for the week‐long festival troubled some of the neighboring farmers. One man chased an orange‐robed Sannyasi off his property with a shotgun and battered his young assistant when he caught them bathing in his creek. But the rest of the community hardly blinked. The festival also drew parents of the devotees who came for a rare moment of contact with a daughter or a son “From a parent's point of view, the Hare Krishna movement is fantastic,” smiled a middle‐aged woman who said she was from upstate New York ‘where her husband is a professor of medicine at the University of Rochester. “First Steve [her son] was into radical politics, then into drugs and the whole hippie scene, and then a Jesus Freak,” she said. “One year he spent in Mexico looking for a perfect Stone Age cave for a commune, and spent another year following a crazy old man who thought he was the incarnation of Elijah. All those years he rejected his parents, but one of the first rules of the Krishna people is reconciliation with the family.

A retired chemical engineer from Maryland and his wife pointed out their 21‐year‐old daughter to another visitor. “That baby she's carrying is my grandson,” said the man. “I don't know what's’ going to become of him.”

The Hare Krishnas preach that women have a natural propensity for child‐rearing and caring for the home, but also advise against strong emotional attachments inside a family. It is recommended that children should be sent by the time of their fifth birthday to the cult's school in Dallas.

James Hammond, a college student from Maine who came to the festival to explore Krishna consciousness further, had his doubts. “It seems young people do things like this in a fit of depression,” he remarked “I get skeptical when I see all these people who've done all these depressing things in drugs get caught up in stuff like this. You keep hearing the same old cliches about how hign they are on it and how rewarding it is, and the next time you see them they're, into something else.” How many devotees dropped out of the movement it not publicly discussed by the leaders, who call the process “blooping.”

“Bloop,” explained Rasananda Das, an intense 29‐year‐old former medical student named Hyman Zuckerman, “is the sound the soul makes as it falls into the pool of materialism.” 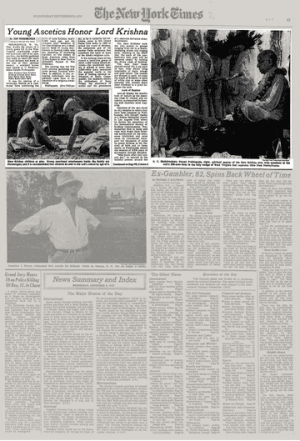 If you have original (good quality) article, contact [email protected]