Swami in the loft in the New York

The meeting of the mystical East and practical West comes alive in the curious contrast between A.C. Bhaktivedanta Swami and his American disciples. The Swami, a cultivated man of 70 with a distinguished education, is here for a year to preach his gospel of peace, good will, nearness to God, and more practically, to raise money for his American church…. Like his teachings, the Swami is sensible and direct. His main teaching is that mankind may come closer to God by reciting His holy name. Despite the fact that the Swami came to America to seek out the roots of godless materialism—a disease, he says, that has already enveloped India—he is a realistic man. “If there is any place on Earth with money to build a temple, it is here.”. . The Swami wishes to found in America an International Society for Krishna Consciousness, which will be open for anyone—including women. 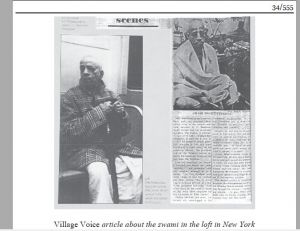 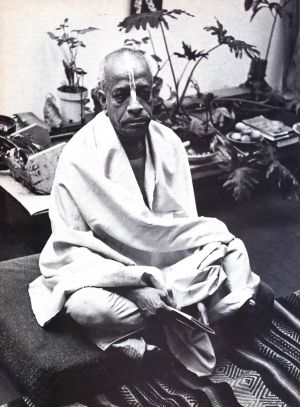 The Secret of Krishna Consciousness 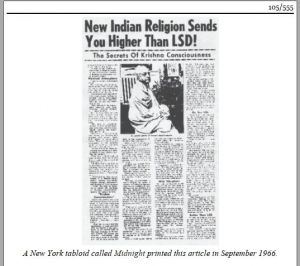 Sitting under a tree in a Lower East Side park and occasionally dancing, 50 followers of Hindu swami repeated a 16-word chant for two hours yesterday afternoon to the accompaniment of cymbals, tambourines, sticks, drums, bells and a small red organ. Repetition of the chant, Swami A.C. Bhaktivedanta says, is the best way to achieve self-realization in the age of destruction. While children played on Hoving's Hill—a pile of dirt in the middle of Tomkins Square Park—or bicycled along the sunny walks, many in the crowd of about 100 persons standing around the chanters found themselves swaying or clapping hands in time to the hypnotic, rhythmic music. It brings a state of ecstasy, said Allen Ginsberg, the poet, who was one of the celebrants. For one thing, the syllables force yoga breath control; that's one physiological explanation. The ecstasy of the chant, or mantra –Hare Krishna, Hare Krishna, Krishna Krishna, Hare Hare, Hare Rama, Hare Rama, Rama Rama, Hare Hare—has replaced LSD and other drugs for many of the swami's followers, Mr. Ginsberg said. Drugs are replace He explained that Hare, pronounced HAH-ray, is the name for Vishnu, a Hindu god, as the bringer of delight, Rama, pronounced RAH-mah, is the incarnation of Vishnu as the prince of responsibility. Krishna is the God-narrator of the Bhagavad-Gita, one of the chief Hindu religious books. The chant therefore names different aspects of God, Mr. Ginsberg said. Another celebrant, 26-year-old Howard M. Wheeler, who described himself as a former English instructor at Ohio State University now devoting his full time to the swami, said: I myself took 50 doses of LSD and a dozen of peyote in two years, and now, nothing. The swami orders his followers to give up all intoxicants, including coffee, tea and cigarettes, he said in an interview after ceremony. In this sense, we are helping your Government, he added. However, he indicated, the Government apparently has not appreciated this help sufficiently, for the Department of Immigration recently told Swami Bhaktivedanta that his one-year visitor's visa had expired and that he must leave, he said. The case is being appealed. The swami, a swarthy man with short-cropped grayish hair who was clad in a salmon-colored robe over a pink sweater, said that when he first met his own teacher, or guru, in 1922, he was told to spread the cult of Krishna to the Western countries through the English language. Therefore, in this old age [71], I have taken so much risk, he said. He arrived in the United States in September, 1965. The swami, whose title is equivalent to the reverend, conducts chanting and gives lectures at his International Society for Krishna Consciousness, Inc., a storefront at 26 Second Avenue, between First and Second Streets, on Mondays, Wednesdays and Fridays from 7 to 9 P.M. and every morning at 7 A.M. He has scheduled another session in the park at Seventh Street and Avenue A on Sunday at 2 P.M. His followers were said to include a lawyer, a mathematics professor and several teachers and social workers, as well as full-time devotees.

The text under the picture (up, right): The New York Times (by Allyn Baum) Two youths are stirred to dance at concert presided over by Swami A.C. Bhaktivedanta in Tompkins Square Park. 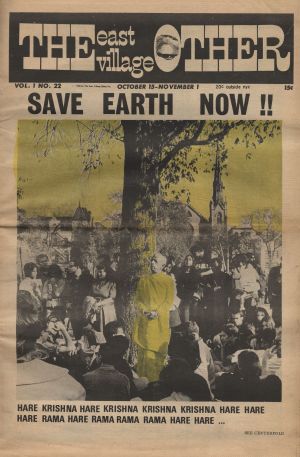 Front page of The East Village Other

Once upon a time, a bunch of theologians jumped a poor old man in a darkened church, bashed his head in, and left him for dead. The next morning, the press was running long obituaries which identified the corpse as being that of the late, beloved God. Some people, however, didn't believe the story so they went to the graveyard, secretly exhumed the corpse and, to their relief, found that it had all been a case of mistaken identity. For, reposing in glorious decomposition in the golden casket was not the body of God, but that of his PR man: organized religion.

At once, the good tidings swept across the wide world. "GOD LIVES!" became household words in the palaces of Popes and Presidents; politicians repromised Him to the poor. The Vatican Council, after having just recovered from the death of Christ, breathed a sigh of relief. Priests and ministers withdrew their resignations. Someone started a war. Everything was gonna be groovy again.

But where was God? No one could find Him. They chased a rumor to Argentina but found only six Dachau dykes selling Torahs in a jungle village. A full page ad in the New York Times, offering a reward for information leading to the discovery of the whereabouts of God, and signed by Martin Luther King and Ronald Reagan, brought no response. People began to worry and wonder again. "God," said some people, "lives in a sugar cube." Others whispered that the sacred secret was in a cigarette.

But while this was all going on, an old man, one year past his allotted three-score-and-ten, wandered into New York's East Village and set about to prove to the world that he knew where God could be found. In only three months, the man, Swami A.C. Bhaktivedanta, succeeded in convincing the world's toughest audience - bohemians, acidheads, potheads and hippies - that he knew the Way to God: Turn Off, Sing Out and Fall In. This new brand of holy man, with all due deference to Dr. Leary, has come forth with a brand of "Consciousness Expansion" that's sweeter than acid, cheaper than pot and non-bustable by fuzz. How is this all possible? "Through Krishna," the Swami says.

For the cynical New Yorker, living, visible, tangible proof of this can be found at 26 Second Avenue (between 1st and 2nd Streets) any Monday, Wednesday and Friday night between 7 and 9 p.m. when the sounds of cymbals, drums, bells, voices, harmonium and the innards of an old piano waft across the slums of the East Village like incense. One glance through the storefront window reveals the Swami seated on his dais leading "Kirtan" surrounded by some 30 young barefoot disciples who sing, dance, chant and listen to his lectures on the Gita, the principal scripture of Hinduism handed down some 5,000 years ago by Sri Krishna, an incarnation of God. Sitting crosslegged in his golden robes, the swarthy complexioned Swami tells his followers in a soft voice that "Krishna is everything". "We see now His maya," he says, "His illusory energy which is the entire material universe, Krishna is behind this. He supports everything. But this material universe is full of suffering. Let us return to Krishna's true abode, His spiritual universe. It is His spiritual kingdom that is eternal."

Many of the Swami's new disciples, who include Allen Ginsberg, feel that the Swami's greatest contribution is the "Kirtan," form of meditation which leads to consciousness expansion. The uniqueness of the "Kirtan" lies in the fact that it is a rhythmic, hypnotic 16-word chant ("Hare Krishna, Hare Krishna, Krishna, Krishna, Hare Hare, Hare Rama, Hare Rama, Rama, Rama, Hare Hare") sung for hours on end to the accompaniment of hand clapping, cymbals and bells.

"The Kirtan," says the Swami, "is as natural as the cry of a child for his mother. It is a meditation of body and spirit through the senses. It is feeling the presence of God and crying out to Him for help." One of the Swami's disciples confessed, "I started chanting to myself, like the Swami said, when I was walking down the street: Hare Krishna, Hare Krishna, Krishna, Krishna, Hare Hare, Hare Rama, Hare Rama, Rama, Rama, Hare Hare over and over, and suddenly everything started looking so beautiful, the kids, the old men and women... even the creeps looked beautiful... to say nothing of the trees and flowers. It was like I'd taken a dozen doses of LSD. But I knew there was a difference. There's no coming down from this. I can always do this, anytime, anywhere. It's always with you.

"Everybody's trying to get high and stay there," another young disciple stated. "Everybody's looking for an exalted state of consciousness, a way to flip out and stay out. But there's something bringing you back to the old miserable routine. Not with this. This has a snowballing effect. You can chant your way right into eternity." "Into eternity... and beyond," the Swami adds.

The cosmic or expanded consciousness, called "Krishna concsciousness" by the Swami, is an awareness of a soul present within the body. "It is also," he preaches, "the same awareness of life as when taking LSD. It is partly the constant awareness of the Lord living in all things - in the insects, and animcals [sic], in the earth, in buildings and sidewalks, cars and machinery, and in men, and in the sun and boundless universe. It is the state of bliss and of love in all life."

After Turning Off and Singing Out his disciples in this way, the Swami makes everyone Fall In to a special diet which forbids the ingestion of coffee, tea, meat, eggs and cigarettes to say nothing of marijuana, LSD, alcohol and illicit sex. The energetic old man maintains that the human body requires only natural, healthy food products, such as grains, fruits, vegetables and milk. His students seem to agree.

The Swami met his first guru (teacher) in India in 1922 and was instructed to spread the way of Krishna in the Western world. Last year he came to America and, after a stay in the Philadelphia area, he traveled to New York and succeeded in establishing his society called The International Society for Krishna Consciousness. In addition to handling the affairs of the Society, lecturing, and conducting meetings, he works on a mammoth project involving an English translation of the Bhagavad-Gita, the principal scripture of Hinduism, and a proposed 60-volume edition of the Srimad Bhagavatam. These, in addition to his newspaper "Back to Godhead," establish the Swami as a leading exponent of the philosophy of Personalism, which holds that one God is a person but that His form is spiritual. "Since man is part and parcel of the Supreme," says the Swami, "he can come to know something of God through self-knowledge. It is like gaining knowledge of the ocean by inspection of one drop of its water.

The Swami, whose title means one who is master of the senses, is quick to point out that his Society is not a religion seeking converts. "There is one God," stated the Swami, "and I bring my students here not to convert them to Him, but simply to convince them. I do not seek to change any man's religious practice."

In order to convince more people that the Way is through Krishna Consciousness, the Swami and his followers have begun to sing the "Kirtan" in Tompkins Square Park every Sunday afternoon. There, in the shadow of Hoving's Hill, God lives in trance-like dance and chant. 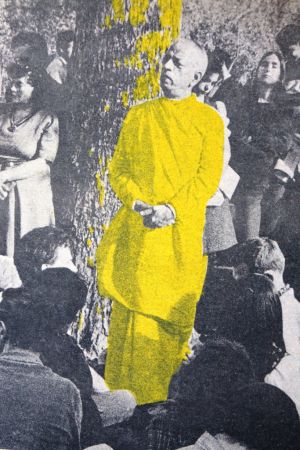 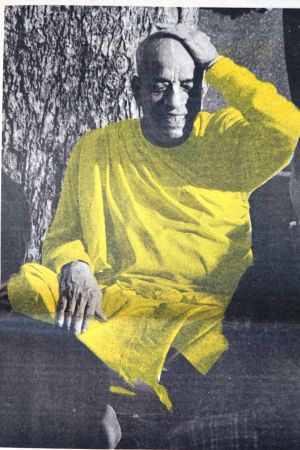 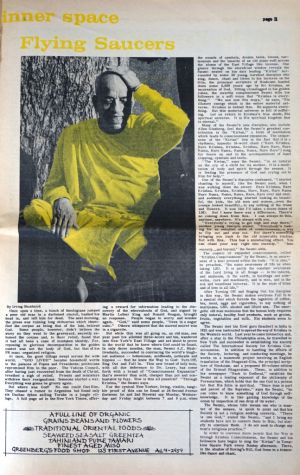