His Temple Is Open

In the middle of San Francisco's hippieland, a holy man from India today began establishing a new temple devoted to the Science of God and pursuit of world peace.I invite everyone in any condition of life to come with us along the path of learning Krishna Consciousness, declared Swami A.C. Bhaktivedanta.Everyone, including the Haight-Ashbury bohemians and beatniks?Everyone, including you and anybody else, be he or she what is called an 'acid head' or a hippie or something else, replied the 71 year old Swami, who hastened to explain: Once he is accepted for training, he becomes something else from what he had been before.'

The lanky 'Master of the Faith,' attired in a flowing ankle-long robe and sitting cross-legged on a big mattress spread on the floor of an almost bare apartment at 518 Frederick St., expounded the philosophy of Krishna Consciousness. A few hours earlier, he had arrived from New York and was met at United Air Lines' Gate 22 by a group of his disciples monotonously chanting, 'Hare Krishna ... Hare Rama,' hailing the names of ancient Hindu gods.Many of the 50 greeters were of the long-haired, bearded and sandaled set, each holding a length of incense and a flower offering as they squatted on the floor swaying and clapping their hands in rhythm with the chants.In the Frederick Street apartment the Swami, who migrated from India a year ago and last summer founded his first temple center in New York, termed his new sect a faith of 'austerity.' He said there were four basic prerequisites for applicants seeking entry into his movement, enumerating them in these words: 'I do not allow my students to keep girl friends. I prohibit all kinds of intoxicants, including coffee, tea and cigarets. I prohibit meat eating And I prohibit my students from taking part in gambling.' Asked whether his shall not commandments extend to the use of LSD, marijuana and other narcotics, the Swami emphasized:'I consider LSD to be an intoxicant. I do not allow anyone of my students to use that or any intoxicant.

He reported that some of his students and disciples in New York had given up drug usage before they could enter his 'International Society for Krishna Consciousness.' Swami Bhaktivedanta stresses such 'square' virtues as utmost cleanliness, religious belief and sexual propriety. 'I train my students,' he said, 'to rise early in the morning, to take a bath early in the day and to attend prayer meetings three times a day. There are 20 disciplinary items in the rules of our movement.' He said that ordinarily religion is construed to mean a faith, but the faith, as a concept of God, is only part of his movement.'Our movement is the Science of God.' he declared.The big mistake of modern civilization, he asserted, is to 'encroach upon others' property as though it were one's own,' thereby creating an unnatural disturbance. God is the 'ultimate proprietor of everything' in the Universe. When people know his 'formula for peace,' he said, 'it is then and there that peace will prevail.

The text under the upper picture: A group of the swami's disciples squat on the floor in his Frederick Street flat – Examiner Photo 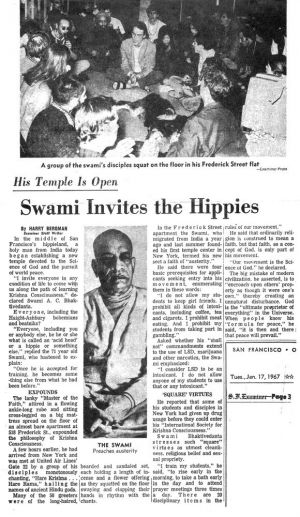 The text under the picture of Prabhupada in the article: THE SWAMI Preaches austerity 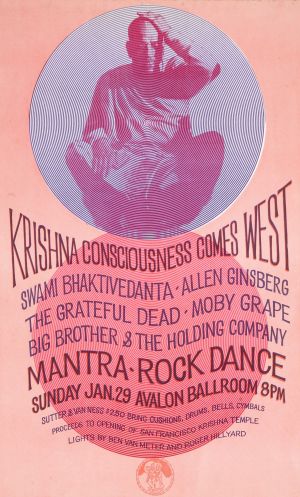 The Mantra-Rock Dance was a counterculture music event held on January 29, 1967, at the Avalon Ballroom in San Francisco. It was organized by followers of the International Society for Krishna Consciousness (ISKCON) as an opportunity for its founder, A. C. Bhaktivedanta Swami Prabhupada, to address a wider public. It was also a promotional and fundraising effort for their first center on the West Coast of the United States. The Mantra-Rock Dance featured some of the most prominent Californian rock groups of the time, such as the Grateful Dead and Big Brother and the Holding Company with Janis Joplin, as well as the then relatively unknown Moby Grape. The bands agreed to appear with Prabhupada and to perform for free; the proceeds were donated to the local Hare Krishna temple. The participation of countercultural leaders considerably boosted the event's popularity; among them were the poet Allen Ginsberg, who led the singing of the Hare Krishna mantra onstage along with Prabhupada, and LSD promoters Timothy Leary and Augustus Owsley Stanley III. The Mantra-Rock Dance concert was later called "the ultimate high" and "the major spiritual event of the San Francisco hippie era." It led to favorable media exposures for Prabhupada and his followers, and brought the Hare Krishna movement to the wider attention of the American public. The 40th anniversary of the Mantra-Rock Dance was commemorated in 2007 in Berkeley, California. 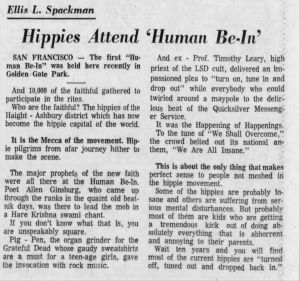 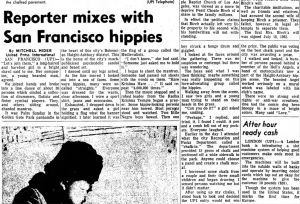 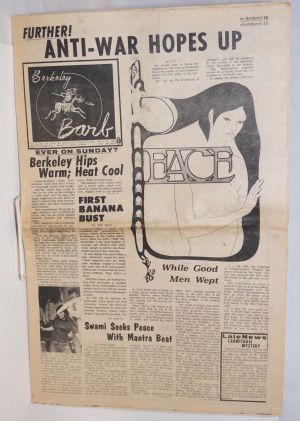 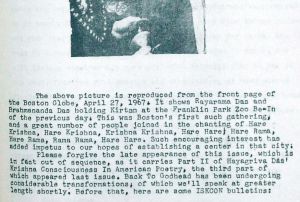 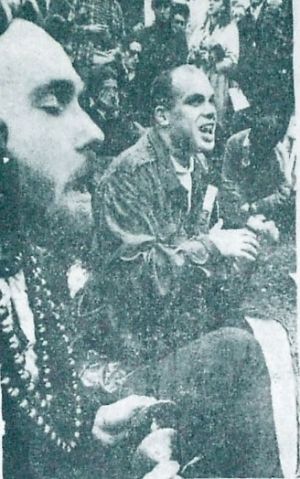 The East Village Other

All the News That's Hip to Print

The color on the front page of EVO, Vol.1 No.22, was yellow and the headline read, SAVE EARTH NOW!! The color should have been orange, says publisher Walter Bowart, a tall, charming 27-year-old man with a mustache. It turns out that the circulation manager picked the color. It's the first time that EVO has come out with a second color over its offset black, but it's still EVO, patched together with the makeshift hands of a self-appointed surgeon performing an emergency operation in the jungle. Of the previous issue, Vol.1 No. 21, 5000 misprint rejects had mysteriously disappeared from the printshop only to be sold illegally at newsstands for the regular price of 15 cents. To forget about the whole thing, the printer offered four pages of color free in the next issue. Well, Bowart says finally, the yellow fits in with the Swami's robes.

Meanwhile, the Swami A.C. Bhaktivedanta, his hands clasped, sits beneath a tree in Tompkins Square Park, in his yellow robes under a yellow heaven. For a newspaper with its office across the street from the park, the Swami is manifestly front page. Above it all, on a black flag, are the words, The East Village Other, which is EVO's proper name. Symbolically peering out from the O in Other is an eye. It is, of course, the EVO eye and, as the posters say, the EVO eye is watching you. 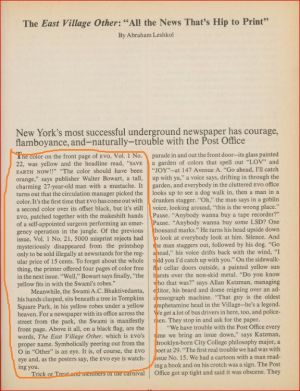 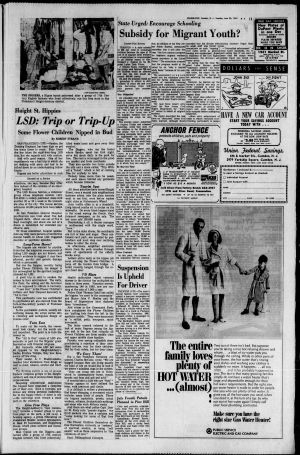 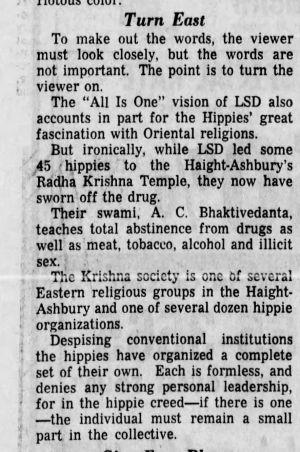 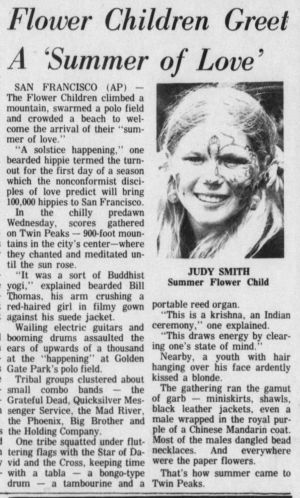 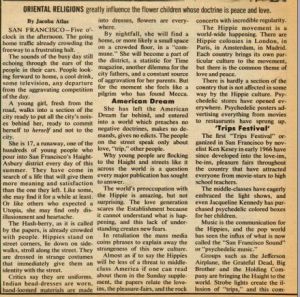 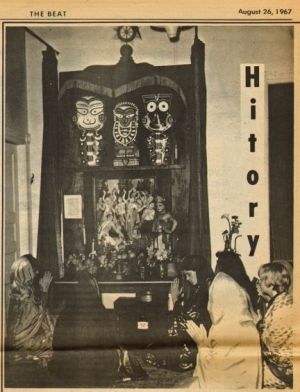 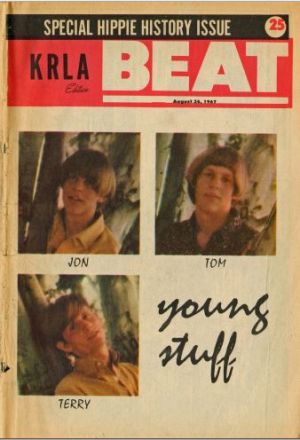