An Island in the Sun

This Krishna colony co-exists with a skeptical world 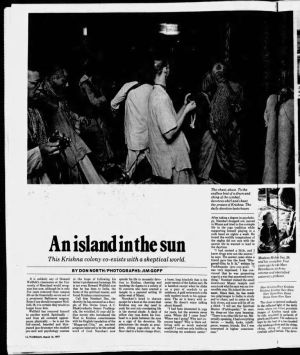 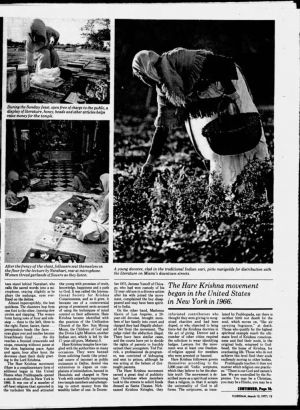 The Hare Krishna movement was called a “bona fide religion” yesterday by State Supreme Court justice in Queens who threw out two indictments against officials of the movement. The indictments had charged them with illegal imprisonment of two members and attempted extortion from the father of one of the believers.

“'The entire and basic Issue before this court,” said Justice John J. Leahy, “is whether or not the‐ two alleged victims in this case and the defendants will be allowed to practice the religion of their choice—and this must be answered with a resounding affirmative.”

The indictments, handed up last year, were the first of their kind against the Hare Krishna movement. They charged that Angus Murphy, the president of the New York temple of the religion, and Harold Conley, the supervisor of women at the temple, held Edward Shapiro and Merylee Kreshour in the temple illegally, by brainwashing them.

Mr. Murphy was also accused of joining Mr. Shapiro in an attempt to extort $20,000 from Mr. Shapiro's father. The allegations were denied by the younger Mr. Shapiro and by Miss Kreshour.

After determining that Miss Kresbouc and the younger Mr. Shapiro had lived voluntarily in the temple at 340 West 55d Street and that there was no case for attempted extortion, Justice Leahy said:

“'The Hare Krishna religion is a bona fide religion with roots in India that go back thousands of years. It behooved Merylee Kreshour and Edward Shapiro to follow the tenets of that faith and their inalienable right to do so will not be trammeled upon.

“The separation of church and state must be maintained. We are, and must remain, a nation of laws, not of men. The presentment and indictment by the grand jury was in direct and blatant violation of defendants’ constitutional rights.”

The judge pointed out that the prosecution, during the hearing last month, had conceded that no physical force had been used by the defendants against Miss Kreshour or the younger Mr. Shapiro, adding:

“The said two individuals entered the Hare Krishna movement voluntarily and’ submitted themselves voluntarily to the regimen, rules and regulations of said so-called Hare Krishna religion, and it is also conceded that the alleged victims were not in any way physically restrained from leaving the defendant organization.” On the allegation of brainwashing, he said:

“'It appears to the court that the people rest their case on an erroneous minor premise to arrive at a fallacious conclusion. The record is devoid of one specific allegation of a misrepresentation or an act of deception on the part of any defendant.

Justice Leahy, who stressed that his decision was intended as a “dire caveat to prosecutional agencies throughout the length and breadth of the land,” cited the constitutional guarantee of freedom of religion said:

“The freedom of religion is not to be abridged because it is unconventional in its beliefs and practices or because it is approved or disapproved by the main stream of society or more conventional region. “Without this proliferation and freedom to follow the dictates of one's own conscience in his search for and approach to God, the freedom of religion will ‘be a meaningless right as provided for in the Constitution.”

Legal and ethical questions have arisen from intensive efforts to “deprogram” members of Hare Krishna and other movements. The main method is to separate the follower from the group and to subject him to long periods of counter-persuasion. Among the controversial and well‐known de-programmers is Ted Patrick, a Californian who was released recently from prison on kidnapping charges resulting from a deprogramming case.

The grand jury was drawn into the Hare Krishna case‐ last September when Hiss Kreshour alleged that she was kidnapped by her mother, Edith, and a private investigator in Queens and subjected to four days of a treatment called “deprogramming.”

The Way The Truth and Getting Out 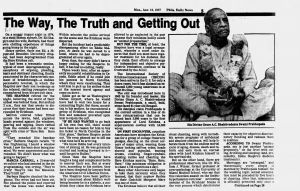 If you have original (good quality) article, contact [email protected]

A Reuther Wedding, Krishna Style, in a Palace by Fisher

Krishna, Who they are? What do they do?, Why the concern?

What if your child joins the cult? 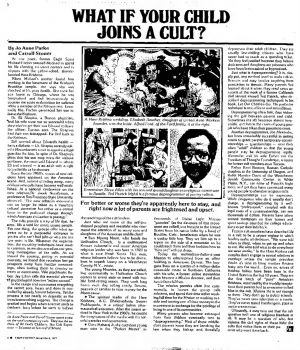 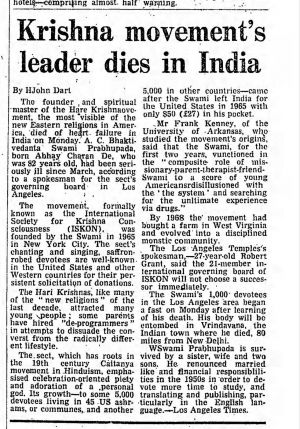 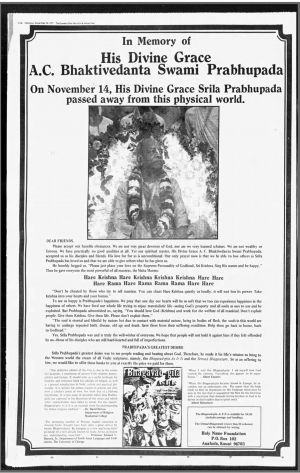